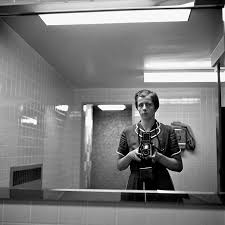 Self Portrait of Vivian Maeir

The documentary is part of the excellent Imagine series of art shows and available on BBC iPlayer until 6th August. The program tells the story of the mysterious nanny who died in 2009 leaving behind a secret hoard of almost 150,000 stunning photographs. Never seen in her lifetime, they were found by chance in a Chicago storage locker and auctioned off cheaply. You can read about Maier’s life here but the incredible thing about her is that she did not even develop many of her pictures and, as the Imagine program says, the only time she saw the image was the brief time during which it was framed in the viewfinder of her Rolleiflex twin lens camera. Somewhat different from today’s photographers who can take a picture and upload it to flickr or other photo sharing web sites, virtually instantaneously, for the whole world to see!

The program set me thinking about the value of rarity and, dare I say it, abstinence. I guess photographers are interested in photography for one or more of the following reasons:

It seems that Vivian Maier was an extreme example of the second and shunned completely the 3rd and 4th. I suspect also the gear didn’t mean very much to her either. I guess we will never know what motivated her to take her photographs though as the above image shows, she was not averse to taking a few self portraits which begs the question of why, if she never saw the final printed result.

Whatever Maier’s motivations, hers is an amazing story and even more incredible when you think her work was only uncovered by accident and could easily have never been found at all. It also shows how in today’s age of greatly over saturated photographic coverage gems like Maiers collection still make an impact and uncover a part of life we were so unaware of, both hers and her subjects.

One Reply to “Vivian Maier”