Photographic Cliches (and How to Avoid Them)

As you will have seen from this and this post I have recently visited two of possibly the most photographed locations in the world – San Francisco and Yosemite National Park. When visiting places such as these it is wonderful to actually experience first hand what you have seen thousands of times in postcards, magazines, on television and at the cinema. As a photographer however how do you take photographs of such places which avoid the cliches that often populate the aforementioned sources but still capture the essence of the place?

According to Michael Freeman in his book The Photographer’s Mind the following makes a cliched photograph:

Avoiding cliches in places like San Francisco and Yosemite is almost impossible. Some ways this can be done are:

To illustrate this here are some pictures I took of probably one of the all time, most photographed bridges in the world, the Golden Gate Bridge which spans the 1.7 miles between the San Francisco and Marin headlands. Let’s see how I tried to capture (for me at least) something a bit unique and different about this bridge trying to avoid the photographic cliche.

First off is pretty much the standard image everyone takes of this landmark. Having walked across the bridge we climbed up the Marin headland (at least avoiding the main throng of tourists on the East side of the highway where most of the coaches and cars park for a view over both the bridge and the city). There’s some quite nice cloud formations to add some interest to this image but this is definitely bog standard stuff and complies with pretty much all of the criteria for making a photographic cliche!

Next is an image from essentially the same viewpoint but zoomed in to just get the North tower and more of the city in the background. I thought making this monochrome would emphasise the structural aspect of the bridge by deliberately removing the iconic orange colour. A slight improvement but still fairly standard stuff.

By the time we had walked back across the bridge to the San Francisco side the sun had gone down and the lights were now on along the bridge. Resting my camera on a handy wall by the visitor centre and increasing the ISO to 1600 I was able to get the next shot. This at least complies with the “different time of day” approach but overall this is still an image you will see on lots of postcards (if not the average tourists photo album). 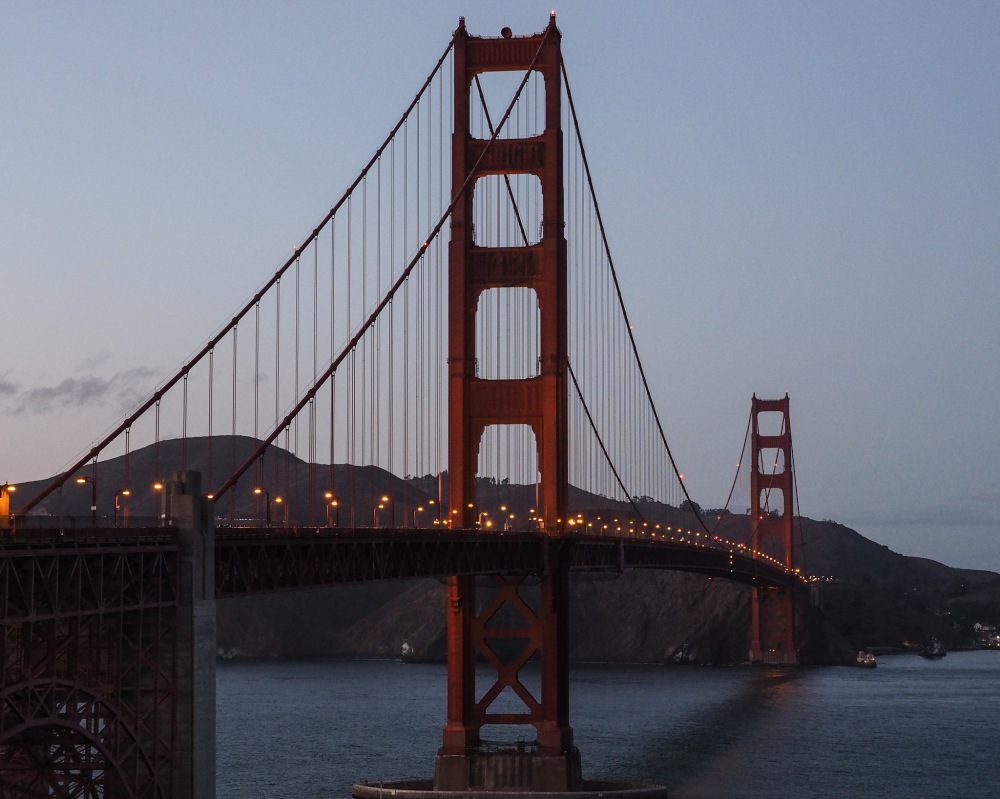 The next day we took the obligatory boat trip to Alcatraz to have a look around the infamous prison island in San Francisco bay. There is a path which takes you down quite close to the water and you not only get a spectacular view of the city but also if you look West a nice view of the bridge in the distance. Although Alcatraz is very much on the “tourist trail” this particular part of the island was surprisingly devoid of sightseers so certainly afforded a slightly different viewpoint. Again I prefer a monochrome rendition of this image as I think it brings out nicely the granite cliff side and white foam in the choppy sea. I think this image is quite pleasing and a little different but still not quite cliche free. It feels like just another view of the bridge, albeit from a non-standard viewpoint. 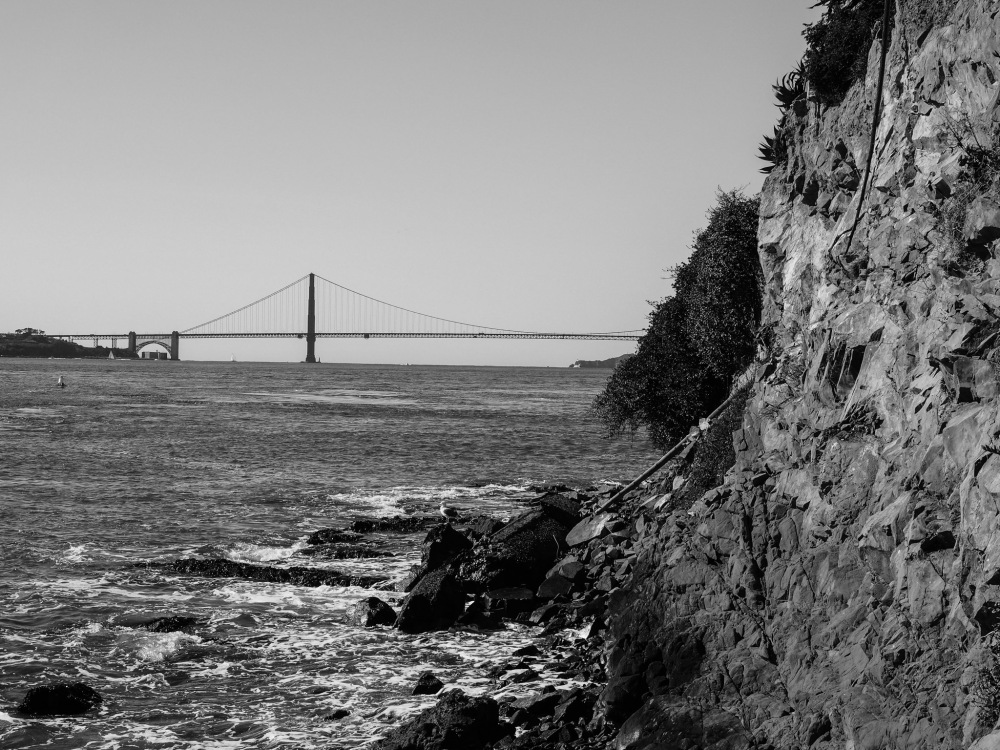 Finally we went inside one of the now abandoned warehouse buildings on the island. The windows are still barred and partly obscured by years of dirt and weathering. Looking through one of these windows the Golden Gate bridge was visible through the dirty glass which I thought would make an intriguing photograph with something of an ‘idea’ behind it. Alcatraz was opened as a prison in 1935 around about the time the Golden Gate bridge started construction (it was completed and opened to traffic in 1937). I imagined how the prisoners may have looked out that window as the bridge was being built and imagined the freedoms it represented, something many of those prisoners would never experience again. I like to think this image goes some way to capturing that ‘unattainable freedom’. 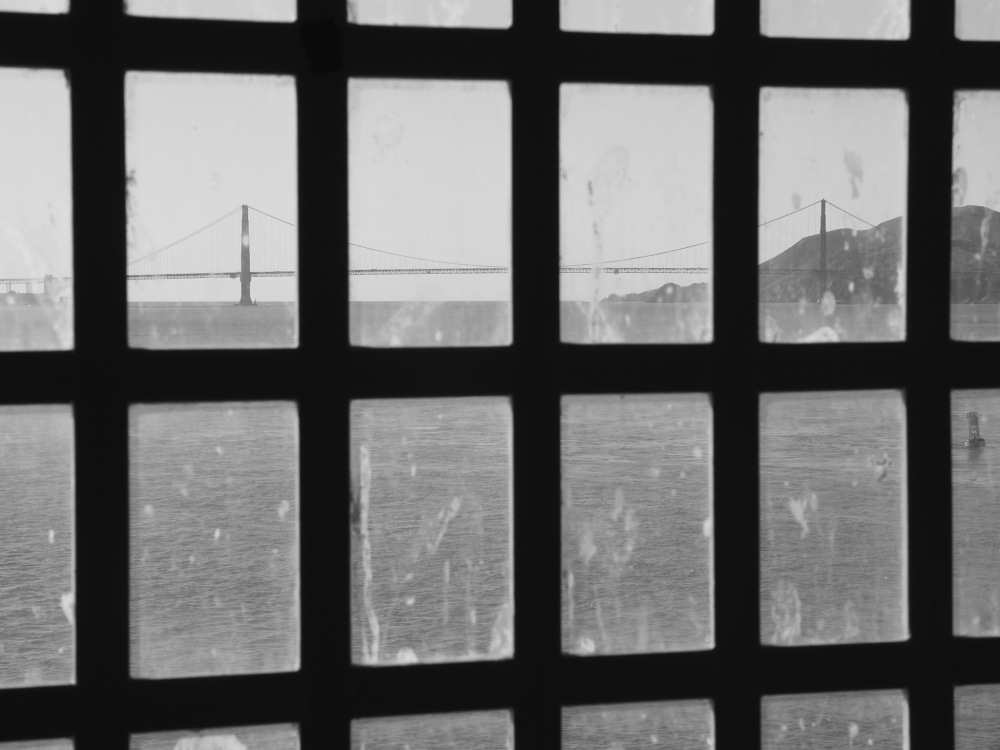 On the final image another point is illustrated which many photographers don’t always consider, especially when in ‘snapping’ mode.  The name you give an image can make quite a difference to the way it is perceived or interpreted. Don’t always go literal but think about the idea or the concept you are trying to illustrate. What must the prisoners inside Alcatraz have thought as they saw the bridge first being constructed and then opened up to cars as people travelled across experiencing the freedoms they had lost? That’s the point I wanted to show in the last image.

One Reply to “Photographic Cliches (and How to Avoid Them)”